From the Rice-Wheat Consortium for Indo-Gangetic Plains [India]

Many farmers in the Indo-Gangetic Plains have taken to alternative tillage practices that reduce costs and raise productivity of rice wheat systems. Rice-Wheat Consortium for the Indo Gangetic Plains (RWC) has been at the forefront in promoting the widespread adoption of zero tillage and permanent bed planted methods. National scientists in the RWC are working with farmers to cut down burning of the crop residues (7-10 tonnes/hectare) predominantly the rice residues, producing 9-13 tonnes of carbon dioxide. Leaving stubbles on the surface, rather than burning is well known to provide a better habitat for the beneficial insects to proliferate is yet to be quantified. With the Pantnagar Zero Till Machine with chisel or inverted 'T' type openers it is now possible to establish a succeeding wheat crop in fields with anchored residues of the previous rice crop. The zero tillage method of wheat establishment has become very popular in the Indo-Gangetic Plains and already a hundred thousand hectares of wheat crop has been planted with Zero Tillage methods in India and Pakistan.

Several farmers recently have brought to the attention of the scientists the rat menace to the wheat crop established with zero tillage method with rice residues left on the surface.

Scientists have observed the rat population more in the fields that are in the vicinity of sugarcane fields. They ascribe the increased infestation of rats in zero tilled wheat fields to the 'migratory' phenomenon. Rice stubbles provide good hiding for the rats, scientists are studying this new concern. Chemical control measures are effective but expensive and time consuming. (Ground Cover, Vol 1, 1998).

Nick Dexter has reported a simple and effective rattrap widely adopted by the Zimbabwe farmers for control of rats. Nick Dexter says that he caught 934 rats with 9 traps in 21 days. Mr. Shekhon, who worked in Namibia and now with the Punjab Agro Industries, says that he tried the trap in Sangrur and it works very well. It is very simple to make the rat trap. 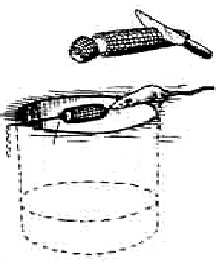 To make the trap you need a 20-litre bucket or large clay pot, which holds water. Bury this in the ground near known rat holes or leading sites.

Take a dry maize cob and cut off the ends. Push through it a thick wire, which is one metre long. Make sure the cob can spin freely. Fasten the cob in position in the center of the wire.

Bend the wire as shown and push firmly into the ground on either side of the bucket. Put a depth of 15cm of water in the bucket.

Each evening, coat the corn cob with peanut butter, wetted flour or some other kind of food which will stick to the cob.

Remove drowned rats each morning. The trap works best during the new moon.

© Copyright of all original material on this website is the property of Keith Addison, unless otherwise stated. It may not be copied or distributed without the explicit permission of the copyright holder. All material is provided "as is" without guarantees or warranty of any kind, either expressed or implied.